The study areas and sites are located along Italian continental margin and the Tyrrhenian Sea. 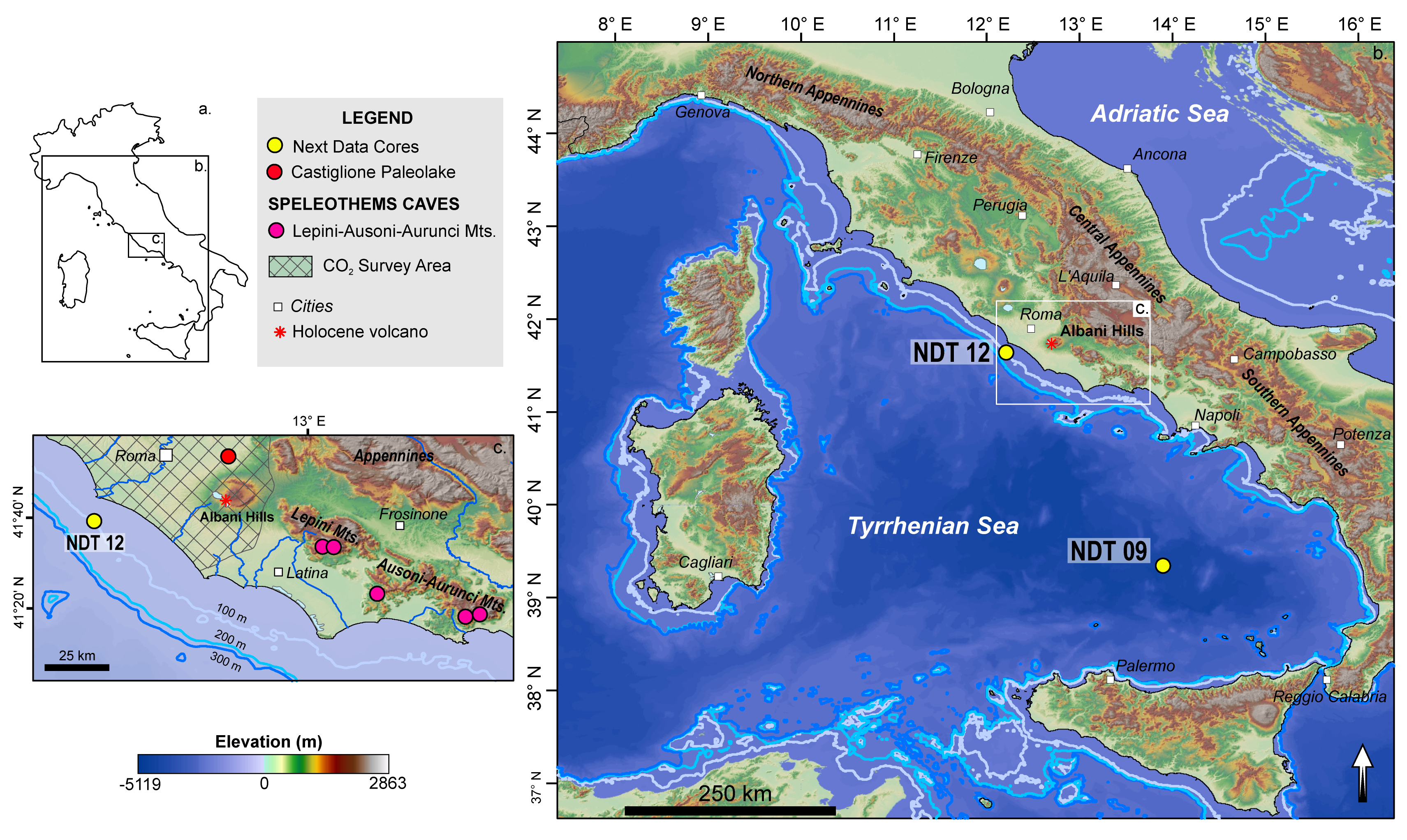 Castiglione crater is an eccentric explosive centre, located on the northern flank of the Colli Albani volcanic complex, about 20 km E of Rome and about 35 km far from the Tyrrhenian Sea. Its phreatomagmatic activity is related to the post-caldera volcanic activity of Colli Albani  (Di Rita et al, 2013). Geochronologic and chronostratigraphic data pointed out that the crater-forming event occurred around 285 ka BP. Sedimentological and stratigraphical observation indicates that the origin of the lake takes place before 250 ka BP (Marra et al., 2003). A lake developed into the crater, after its eruptive phase, but it was drained during the Renaissance-era (Giordano & the CARG team, 2010)

Lepini, Ausoni and Aurunci are three distinct mountain groups belonging to the “Volsci mountain range”, part of the Lazio pre-Apennines. It is a NW-SE oriented mountain range that rises to about 1500 m a.s.l. between the volcanic complex of the Colli Albani to the NW and Roccamonfina to the SE. The mountain structure mainly consists of limestone rocks (limestone, dolomitic limestone, and dolostone) and is characterized by both superficial and underground karst forms such as sinkholes, poljes, canyons and caves. More than 700 cave entrances are known for a total length of tens of kilometers of karst conduits.

The Rome Metropolitan area is located between two quiescent volcanoes, Colli Albani to the SE and Mts. Sabatini to the NW (Marra et al., 2020), whose deposits are separated by the Tiber River. Anomalous diffuse soil CO2 release occurs in some zones on both sides of the river. Rome main gas discharge occurs at Solforata (SW periphery). Colli Albani volcanic complex contains several other zones characterized by a huge discharge of endogenous CO2, the most important of which is Cava dei Selci (Carapezza et al., 2019). Helium isotopic composition indicates that the gas has a magmatic imprint, likely from Colli Albani magma reservoir (Carapezza et al., 2021). CO2 is released both advectively from discrete vents and diffusively from the soil. The gas discharges are located above structural highs of the buried Mesozoic carbonatic basement, revealed by positive gravimetric anomalies, and trending toward NW, SW and SSW (Carapezza et al., 2012).

The Marsili basin is a rectangular bathyal plain located in the southeastern part of Tyrrhenian basin and has in its central part a homonym volcano. It is an oceanic-like backarc basin and is associated to the subduction of the Ionian Slab below the Calabrian Arc. Basin-filling units had been interpreted as turbidites, ash layers, and hemipelagic sediments. Their age is Pliocene through Quaternary. The Holocene interval is intercalated by several tephra layers associated with the volcanic activity of the Campania Plain (Somma-Vesuvius, Campi Flegrei and Ischia Island volcanic areas) and of the Aeolian Arc (Tamburrino et al., 2016).

The investigated zone is part of a well defined physiographic unit, the Tiber delta. The submersed delta is built on the continental platform, about 100 m deep. The river basin comprises a large area of the central Apennines in which carbonate, siliciclastic, and volcanic rocks are present. The modern Tiber River delta evolution covers the last 6000 years, and can be separated into five main evolutionary stages (Bellotti et al., 2000).