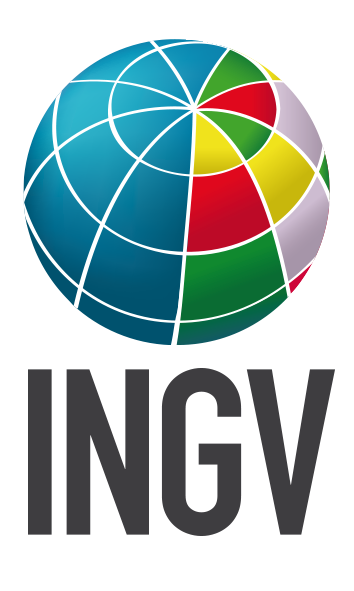 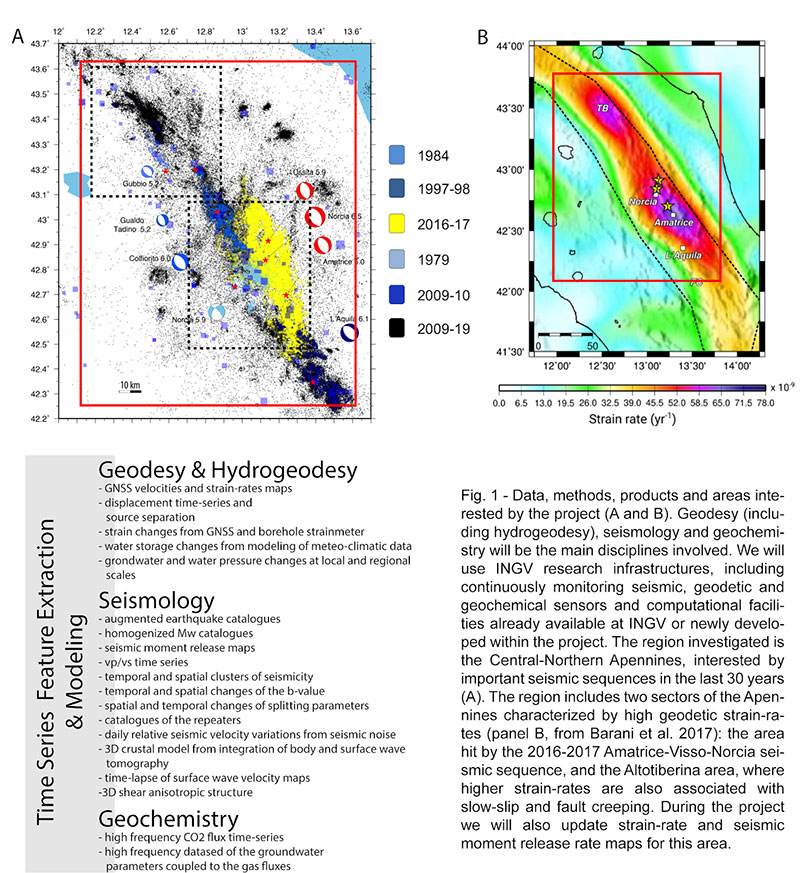 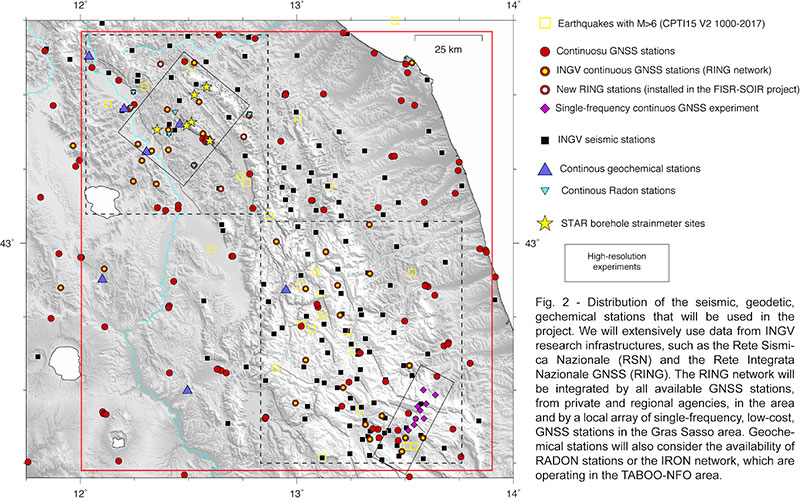 Organizzazione in Unità di Ricerca (UR)

In this project we aim at investigating faulting processes and seismicity pattern evolution during multi-scale seismic sequences, based on high resolution earthquakes catalogues, crossed with long-lasting multidisciplinary (geodetic and geochemical) time series. The systematic analysis of high-resolution multidisciplinary data collected in the near source areas before, during and after the onset of a tectonic deformation episode, will help us to identify the geo-physical/chemical signatures of the earthquakes preparatory and evolutionary phase.

We will work on the detection and spatio-temporal characterisation of consistent signals within multiparametric time-series, underlying processes, such as fluid migration, elastic strain build-up and accelerating crustal deformation episodes, accountable for the earthquake generation. To this end, we will quantify and statistically validate the spatial and temporal relationships between the geodetic, seismological, geochemical and hydrological observations, collected at different temporal and spatial scales around actively deforming areas.

The comparative analyses of multidisciplinary data, organised in time series describing the temporal and spatial evolution, will improve our ability to detect and characterise changes in the spatial and/or temporal pattern of parameters associated with deformation processes occurring before, during and after an earthquake. Particular emphasis will be given to the investigation of the role of fluids (from both shallow and deep sources) and to the so-called “mix mode” fault slipping behaviour. Earthquakes have long been thought as simply frictional stick-slip instabilities, in which stored elastic energy is released suddenly; in such normal (fast) earthquakes, the rupture grows at a rate driven by elastic wave speeds, a few km/s, and fault slip rates reach 1-10 m/s. However, recent studies show that faults also fail via seismic tremor, low frequency earthquakes, slow slip events, and other modes of fault slip. These phenomena, known collectively as slow earthquakes, represent modes of failure that have been proven having a key role in the earthquake preparatory and evolutionary phase.

The results of this project will provide a statistical validation of eventual multidisciplinary transient signals and related mechanisms, occurring in relationship with crustal stress accumulation/release and earthquake cycle deformation. In order to achieve this objective, we aim at improving earthquake catalogues resolution in terms of both hypocentral locations and completeness magnitude, studying the temporal and spatial clustering of seismic activity, the temporal and spatial changes in seismicity rates, changes in the b-value or in the elastic parameters and velocities (from the analysis of seismic noise and seismic anisotropy). Such seismologically-based observations will be compared with the temporal evolution of ground deformation, derived from geodetic observations and the temporal and spatial evolution of geochemical and hydrological data.

Thus, a key component of the project will be the development of feature extraction techniques to compare the multiparametric observational time-series. This analysis will be conducted in order to extract common features, trends and deviations from trends (e.g. change points), from the seismological, geodetic, geochemical and hydrological observational time-series. The common and cross-disciplinary outcomes will be used to both ”clean” the original observations from non-tectonic processes (e.g. hydrological and/or anthropogenic effects) and to comprehensively build models, describing tectonic and non-tectonic forcing.

We will focus our attention in two main areas along the Central and Northern Apennines (Fig. 1 and 2): 1) the region recently interested by a significant seismic sequence in 2016, the Amatrice-Visso-Norcia area, filling the gap between the two most important Italian seismic sequences occurred in the last 20 years (Umbria-Marche 1997-98 and L’Aquila 2009) and 2) the upper Tiber valley area where from 2010, the so called Altotiberina Near Fault Observatory (TABOO-NFO) exists. TABOO is a multidisciplinary monitoring infrastructure allowing immediate and open access to spatially and temporally dense, high resolution sets of seismological, geodetic and geochemical data and derived scientific products (Fig. 2). It is worth noting that a new network of borehole strain and seismometers will be deployed in this area, allowing a dramatic increase of our detection capability of small strain changes, associated with near-fault processes or “triggered” by far-field processes.

MUSE will also be the cultural environment to perform a few local experiments, in collaboration with colleagues pertaining to foreign institutions, in the framework of European projects. The three experiments will be finalised to test the 1) local deformation response to groundwater changes in karst aquifers (in the Gran Sasso area), 2) the impact of using innovative techniques for earthquake monitoring like fiber optic cables and 3) the near-source imaging through noise monitoring techniques based on the deployment of hundreds of (modern and light) seismic sensors. The last two initiatives will be performed in the TABOO area, where the presence of dense seismic, geodetic and geochemical stations will allow a complementary and multidisciplinary monitoring of the tectonic transients.

Task 3- Analysis of the seismic noise

WP4 - Time-series modelling and interpretation of the results

Organisation in Research Units (UR)