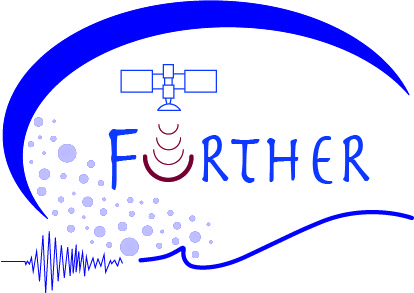 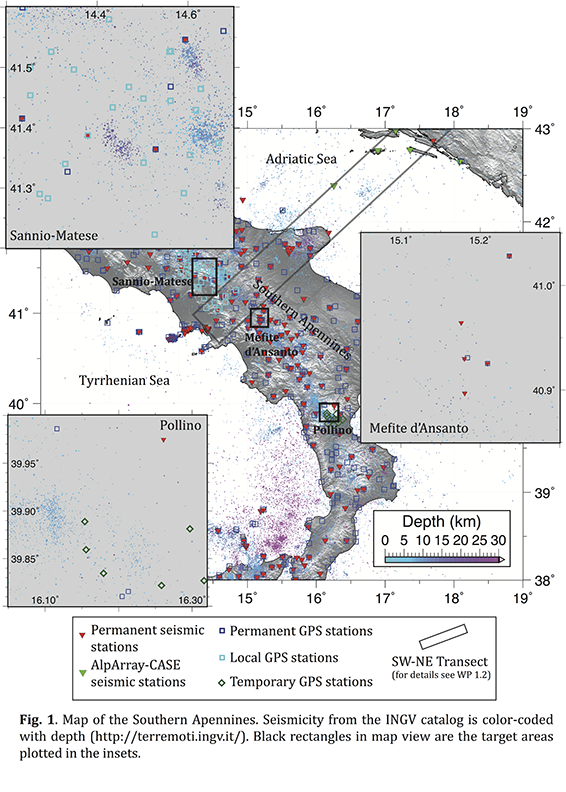 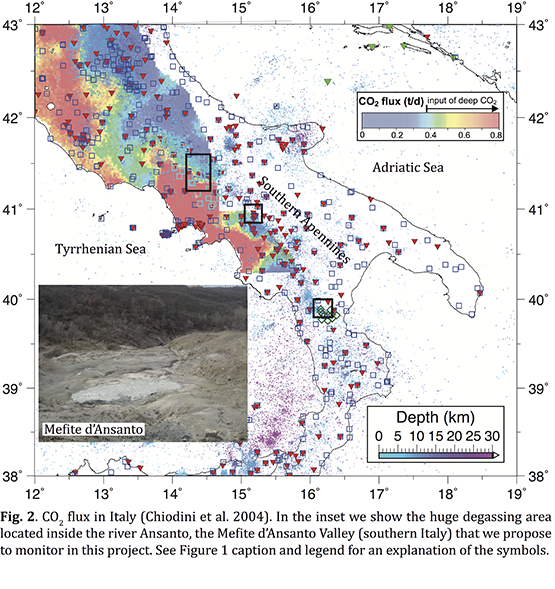 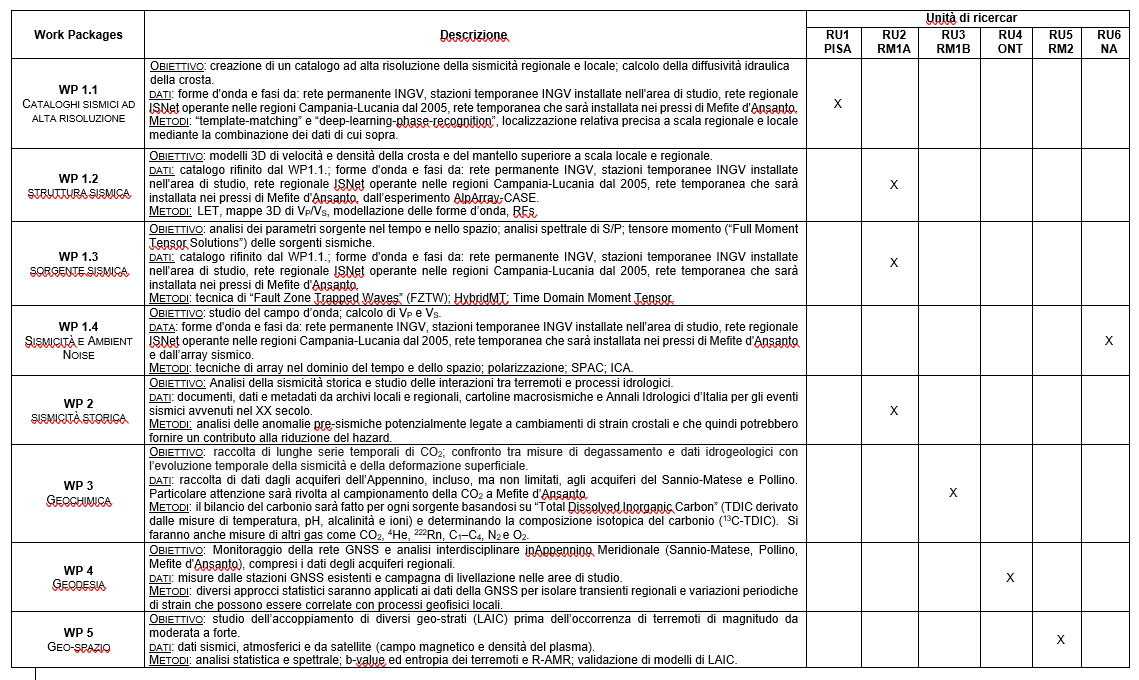 The goal of this project is to establish the role of fluids in the preparatory phase of earthquakes in the Southern Apennines, Italy. We aim to investigate the whole pathway of fluids from the source to the upper crust where major earthquakes occur, using a cross-disciplinary approach that includes seismological, geochemical, geodetic and geospace data. The interplay of fluids, shallow and deep-seated active structures and seismicity will be explored at a local and regional scale, imaging the seismic structure beneath the Southern Apennines, but also at larger scale revealing signals, if any, that can be interpreted as precursory of large earthquakes.

We will focus on three areas of the Southern Apennines, specifically the Sannio-Matese and Pollino mountain ranges and the Mefite d’Ansanto deep CO2 degassing area, which covers a surface area of ~700 m2 (Figs. 1 & 2). We selected these target areas because a) they are seismically active, b) they are characterised by CO2-rich gas emission and/or thermal waters, and c) in these regions the earthquake occurrence has been related to fluids (Amoroso et al., 2017; Chiodini et al., 2010; Di Luccio et al. 2018; Esposito et al., 2020; Napolitano et al., 2019). A systematic and multidisciplinary study of the three areas will contribute to understanding the relationship between surface degassing and seismicity from local to regional scale.

Answers to the following questions are challenging and motivate our study: is the seismicity triggering fluid ascent to the surface or do fluid movements instead trigger seismicity? How do fluids upraise to the surface? Do fluids modulate the magnitude and depth of earthquakes? How does seismic activity and surface deformation affect the hydrological cycle of large aquifers? How does the three-dimensional Southern Apennines lithosphere-mantle structure change with/accommodate the deep CO2-rich fluid discharges during large-moderate earthquakes? At a large scale, does the lithosphere-atmosphere-ionosphere coupling show any signal of fluid involvement in the preparatory phase of earthquakes?

In order to answer the above questions, we need to understand the cause-effect relationship between fluids and seismicity in the study area, addressing the spatial and temporal evolution of the Southern Apennines active dynamics. This will be done by collecting and analysing data and integrating the results from the following research activities:

A further relevant objective of our multidisciplinary study is to strengthen the collaboration among INGV researchers in different fields within geosciences, in order to create a pool of experts able to advance the understanding of the geodynamic processes and thus to contribute in reducing the impact of natural disasters. The collaboration of INGV experts with scientists from the Louisiana State University (LSU), University of Calabria (UNICAL) and University of Perugia (UNIPG) working on geodynamic modelling and crustal geophysics, will bring together different expertise in Earth Sciences and will mutually encourage innovative and stimulating research.

The activity objectives and the proposed research perfectly match the “Terms of references” mentioned in the Call for Proposals. We propose a cutting-edge, multidisciplinary study in seismic areas, characterised by poorly known-source fluids, combining innovative and well-established methodologies.

The proposed research activities are organised in 5 Work Packages (WP) as in the following text and the Scientific Coordinator of each WP is indicated in bold.

The Proposal is organised in 6 Research Units (RU) to coordinate the assigned budget. We limited the number of RUs as required. The RUs, coordinators, personnel and WP of reference are indicated, while Personnel from other institutions are not included in the RUs. 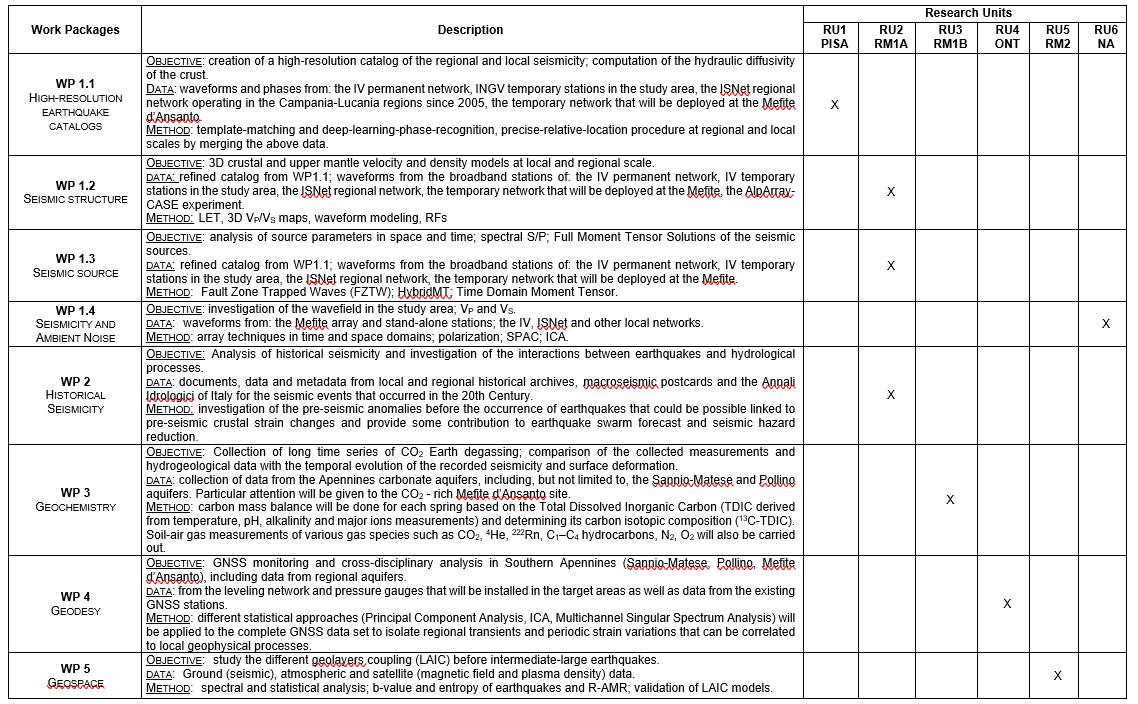