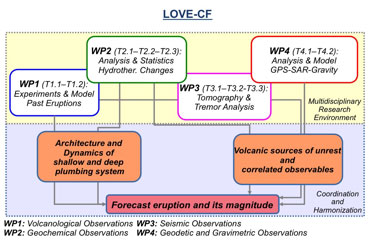 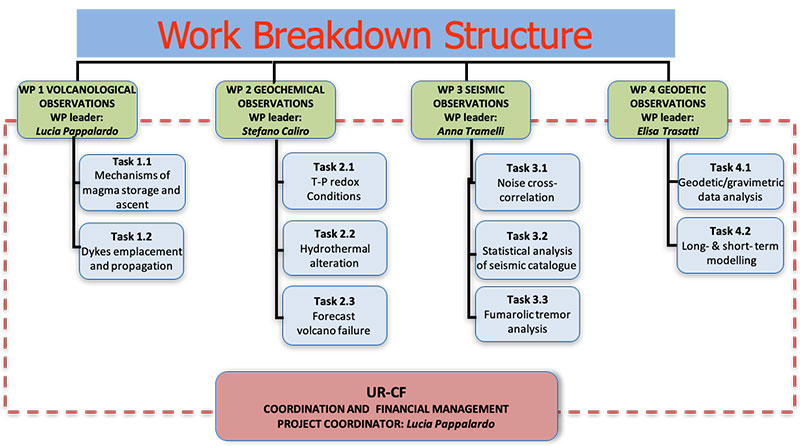 Advanced monitoring networks have improved our ability to measure changes of a volcanic system before, during and after an eruption. However, it remains challenging to relate the monitoring signals with magma movement from deep reservoirs towards the surface. This is particularly true in the case of calderas, in which volcanic unrest can be due to magma movements at depth, changes in the shallow hydrothermal system, tectonic processes, or a combination of them. Furthermore in the event of magmatic unrest, this can result in an eruption or not, depending on the amount, location, and velocity of magma, possibly ascent through a complex network of dykes and sills. The cause of unrest however has critical implications for the potential eruptive hazard and it is frequently subject of scientific debate, even at well-monitored caldera systems.

The current state of Campi Flegrei caldera (Italy) is a typical example of this behavior as it has been experiencing a long-lasting unrest at least since 2000-2005, as testified by the multiparametric data collected by the INGV-NA monitoring system. However, it’s possible evolution towards critical conditions close to eruption, remains largely debated in the recent literature.

site is identifiable in the center of the image.

The LOVE-CF project main goal is improving our ability to forecast the behavior of the Campi Flegrei caldera, through a multi-disciplinary approach based on a combination of volcanological, petrological, geochemical, seismological and geodetic observations, as well as experiments and numerical models. We aim at reconstructing a comprehensive view of the architecture and the dynamics of the plumbing system, through the investigation of representative past events, as a framework to interpret geochemical and geophysical changes observed during unrest. This will allow us to better evaluate the source of volcanic unrest (magmatic or not magmatic) and to forecast its possible evolution towards an eruption.

The LOVE-CF project relies on the following multidisciplinary topics:

The main objectives of the project are:

- evaluation of the nature (magmatic or not magmatic) of the sources of volcanic unrests and definition of the evolution of the associated geochemical and geophysical observables;

- evaluation of the current activity of the caldera and its possible evolution towards critical conditions and then to an eruption;

- assessment of possible correlation between timescale and nature of precursory phenomena with magnitude of the potential impending eruption;

The project involves a single UR (UR-CF) of Coordination and Financial management, while the scientific research activities are organised in 4 WPs grouped in thematic tasks (figure 2).

The expected results of the LOVE-CF project are: (1) constraints on chemico-physical conditions of eruptible magmas in chamber(s), (2) timing and mechanisms of conduit opening and propagation of dykes and relationship with behavior of unrest indicators, (3) interaction between deep rising magmas and shallow hydrothermal system and its influence on surface observables, (4) nature (magmatic or not magmatic) of volcanic sources of the current and past unrests, (5) nature and temporal evolution of unrest indicators as eruption approaches and their possible relationship with magnitude/VEI of the eruption, as well as the location of the vent inside the caldera, (6) developing of new geochemical (e.g. light hydrocarbons) and geophysical (fumarolic tremor) measurements, and their meaning as unrest indicators, (7) evaluation of the current behavior of the caldera and forecasting its possible evolution towards critical conditions and then to an (eventually also major) eruption.

All these information are crucial in terms of civil defense, since they allow constraining the transition between alert levels of the volcano, as well as the location and extension of hazardous areas, strictly related to eruption magnitude.

In this WP, we will combine volcanological and petrological observations on natural rocks from representative Campi Flegrei eruptions of different magnitude, also using neural networks, with those of experiments and numerical models, to examine a possible link between the chemico-physical conditions of magma storage and ascent with eruption magnitude and the related unrest indicators. The results will allow us to track magma crystallisation and degassing taking place during magma storage and ascent, in function of magnitude of the eruption, location of the eruptive vent, and time of occurrence of the eruption inside the three epochs of activity (task 1.1). Furthermore, the information retrieved on natural case studies will be used to reconstruct the emplacement and propagation dynamics of dykes feeding past eruptions, by using ad-hoc numerical simulations (task 1.2).

Here, we will mainly focus on investigating the evolution and current state of the hydrothermal system by innovative geochemical measurements on fluid and alteration rock samples collected both on land (Solfatara-Pisciarelli) and underwater (“Secca delle Fumose”) in the Gulf of Pozzuoli (task 2.1 and 2.2). The results will allow us to infer the relationships between shallow plumbing system and magma degassing at depth, as well as their influence on the pattern of geochemical indicators measured on the surface. Moreover, statistical analyses of geochemical records will be performed with the aim to quantitatively compare different types of multiparametric data, making efforts towards their statistical combination, and then possibly predict the approaching of rock-failure due to magma movement at depth (task 2.3).

This WP will focus on the analysis of the seismic signals recorded in the Campi Flegrei by INGV-NA seismic network from 2012 to 2019, to highlight any eventual variation and explore its meaning. We will analyse the seismic noise recorded in the caldera, focusing on its characteristics and variations in time and space (task 3.1). We will statistically analyse the seismic catalogue that is constantly updated by INGV-NA to evidence the seismicity characteristic parameters (task 3.2). In the meanwhile, we will concentrate on the seismic fumarolic tremor recorded close to the Pisciarelli hydrothermal area, to characterise its source mechanism and to verify its possible meaning as an indicator of unrest conditions.

WP4 main goals are i) to collect the most complete dataset of geodetic monitoring data, including the catalogue of levelling, SAR, tilt, GPS and seafloor measurements; ii) to address the long-term and short-term pre-eruptive deformation source/s, building advanced models of the plumbing system. The recent activity of uplift/deflation, detected by several modern geodetic techniques, will be considered and related to the study of the historical deformations at Campi Flegrei. This approach will give quantitative insights to the volcanic sources, using as a paradigm, the historical activity in order to quantify deformation hazard levels usable to forecast future eruptions. Task 4.1 will focus on better defining the current state of the Campi Flegrei unrest in terms of surface deformation of the caldera, analysing most of the available data since 1905 from different monitoring techniques. Task 4.2 is dedicated to the analytical and numerical modelling of the volcanic source and plumbing system.

Figure 3 - Methods and objectives of each WP and main perspectives of the project.